This Neighborhood Has Always Been for Foodies

3 weeks ago Chelsea No comments

These days, there are plenty of “Top Ten Best” lists and foodie Instagram accounts to show you all the exciting and diverse culinary options of our Lower East Side/Chinatown/Loisaida neighborhood. It seems like everyday a new bakery or cafe or pizzeria is opening. The buzz might be modern but the food scene in these parts has been around a lot longer than Instagram. Or the internet! We knew that, of course. That’s why we named our signature street festival Egg Rolls, Egg Creams, and Empanadas – after three iconic foods of the immigrant communities that call the neighborhood home. Food is delicious and sustaining, but it is so much more than that, too. It’s a way for new immigrants to America to connect with their first home. It’s a way for one culture to honor and celebrate another. And it’s a way to explore how communities shift, change and adapt over time. (Next time you’re stepping out for an afternoon snack, you have permission to tell yourself “This is field research I’m doing.”)

Next week is Food Week in our month-long Egg Rolls, Egg Creams & Empanadas festival and on Sunday, June 6th we’ll sit down in Zoom with several movers-and-shakers of the neighborhood food scene. And most of these folks are no newbies – they’ve have been feeding us for decades. Take a look at some of these iconic businesses below, and then make sure to register for your free spot to join them at the virtual program on Sunday!

Nom Wah is a longtime Chinatown establishment. It opened in 1920 as a tea parlor and bakery, on a crooked street known as the “Bloody Angle” because it often attracted gang activity. The tea shop was best known for its mooncakes before becoming a renowned dim sum restaurant. Today, Nom Wah has expanded to include Philadelphia and Nolita locations, each bringing Cantonese and Chinese American flavors to the table. The current owner, Wilson Tang, has also published a cookbook that tells the stories behind the recipes at Nom Wah’s roots.

Russ & Daughters has been a Lower East Side institution since 1914. For over 100 years and over four generations, it has been a cornerstone for Jewish foodways in the city. It all began with Joel Russ, an immigrant from a shtetl in modern day Poland, selling schmaltz herring from a barrel. Over time, Russ grew from selling herring from a barrel to a pushcart (learn more about pushcarts in this post!), from a pushcart to small store, until finally opening the original location on East Houston street. Joel Russ made his daughters partners in the business, and named the business after their family-oriented model. Since then, the restaurant has been an iconic business for babka, smoked fish, pickles, and beloved egg creams. We’re happy to say that this historic business is thriving – the Russ family opened a sit-down restaurant, Russ & Daughters Cafe, in May 2014 and recently added another location in the Brooklyn Navy Yard!

Casa Adela has been serving up authentic Puerto Rican cuisine since 1978. The beloved owner, Adela Fargas, greeted customers with warmth while they ate home cooked specialties like rotisserie chicken, roast pork with arroz con gandules. Customers love the atmosphere almost as much as the food – Casa Adela is a warm and inviting environment that makes you feel like you’re eating at your favorite grandmother’s house. After Fargas’ death in 2018, her family took ownership of the restaurant, and continue to deliver their perfectly seasoned food to their fans. The most popular dishes are mofongo con pernil, Chicarron de Pollo, rotisserie chicken, fried pork chops, and of course, pastelillos. 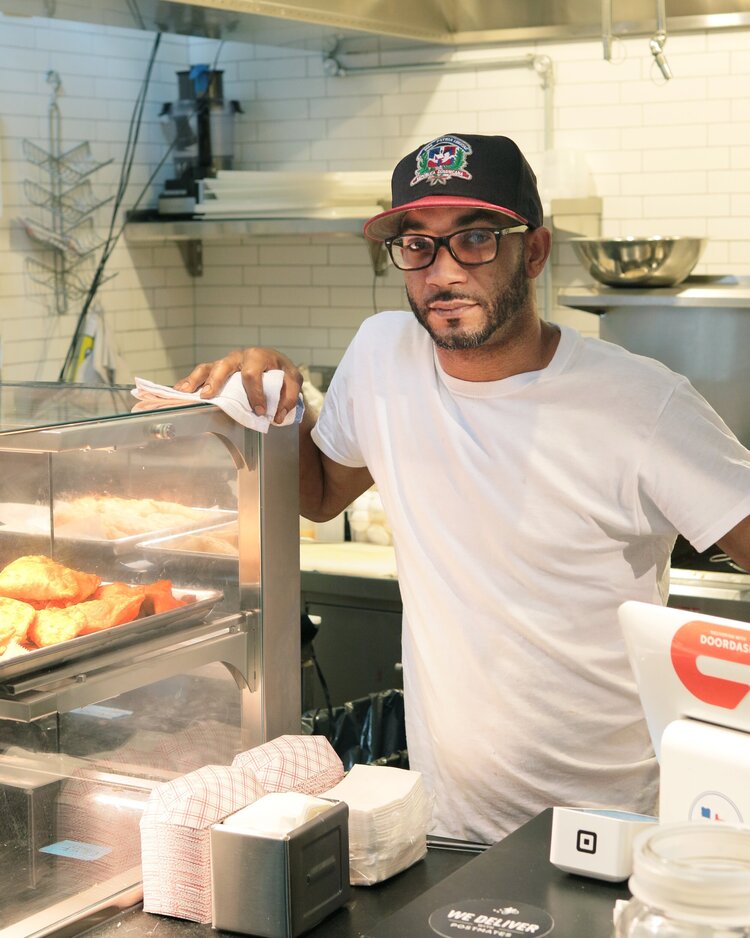 The newcomer on our list, Dominican Cravings opened in the new Essex Street Market in 2018. But that doesn’t mean it lacks pedigree! Emmanual “Manny” Diaz graduated from the International Culinary Center before working at acclaimed New York eateries like Salvation Burger and ABC Cocina. After honing his craft, Manny stepped out on his own to open Dominican Cravings at the Essex Street Market. With his solo venture, he gets to highlight the food of his native Dominican Republic while serving up modern and unexpected twists. A perfect place for Eldridge Street – traditional immigrant heritage mixing with new cultures and communities. Case in point? Dominican Cravings serves a very popular cheeseburger empanada.

We can’t wait to get in the same (Zoom) room with these legends of the food scene and talk about how immigrant food has shaped New York City’s (and the country’s!) culinary and cultural landscape. You can join us, too – tickets are free and available right here. See you then!