Life Under the Heavens: Depicting Stars in Sacred Sites

At the Eldridge Street Synagogue, stars are a dominant design feature of the sanctuary. Gold five-pointed stars dot fields of rich blue. They fill the domes of the sanctuary, shining as they reflect warm light from the chandeliers below. These stars, particularly visible from the woman’s balcony, reference Jewish scripture. They also express the newly-formed American identity of the synagogue’s immigrant worshipers, referencing the stars of the American flag. Yet despite this specific meaning, Eldridge Street is not the only synagogue decorated with stars, nor are synagogues the only houses of worship that use stars to communicate deep-seated spiritual beliefs. Stars appear in religious sites across the Abrahamic faiths. They crop up in droves not just in synagogue design, but also in that of the most magnificent cathedrals and mosques in the United States and around the world.

One of the most notable examples of stars within cathedral decoration is the ceiling at Sainte Chapelle in Paris. Built in the first half of the 13th century, Sainte Chapelle was the French King’s personal chapel. It was built to look like a reliquary, or the highly ornate containers that held Christian relics. Walking into Sainte Chapelle, one’s eye is immediately drawn to the walls, seemingly made only of glass. Colored light streams through, illuminating the space with a heavenly glow that permeates every corner of the space. The only break from this glittering mass of color is the ceiling, a dark blue field covered with glittering gold stars. Suspended on dramatically spindly columns of stone that appear to defy the rules of gravity, the starry ceiling looks like the heavens brought to earth, held up only by the sheer will of God.

This visual representation of the realm of the divine is a common theme within Gothic structures like Sainte Chapelle. The heavens were God’s creations, as God says in the book of Isaiah, “My own hands stretched out the heavens; I marshaled their starry hosts.” These spaces, filled with colored light, gleaming gold, and soaring ceilings, sought to be holy experiences in their own right. They convinced worshipers of the power of their God. The starry ceiling made God’s kingdom of heaven almost close enough to touch: It reminded them of their final, glorious destination as the reward for their faithfulness.

Within Islamic architecture and design, stars also feature heavily, decorating mosques from Bangladesh to Spain. The form of these stars is more subtle than the glorious ceilings of Sainte Chapelle and the Eldridge Street Synagogue, however, as multiple pointed stars act as the basis for ornate geometric patterns, or tessellations, that decorate domed mosque ceilings. These geometric patterns developed in response to the prohibition of figural images in the Quran and Hadith, the holy texts of Islam. While these rules have been followed to varying degrees throughout Islamic history, the widespread prevalence and beauty of geometric patterns within mosques is undeniable.

These patterns fill ceilings from the Hazrate-Masomeh mosque in Qom, Iran (below, left) to the Wazir Khan Mosque in Lahore, Pakistan (below, right). The patterns are both visually appealing and theologically significant because of their symmetry. The radial symmetry of these star-based designs conveys the harmony, perfection, and masterful order of God’s earthly creations. It also represents the order and divine perfection of the heavens, as “Allah created the heavens and the earth in true proportions.”  Complementing the theological importance of these patterns is the effect of the act of gazing upon these ceilings. The repetitions and symmetry make looking at the ceiling a meditative activity, prompting the eye to focus on the central point of the heavenly pattern. This physical act mirrors the goals of prayer to meditate and refocus on the most central point of the Islamic faith — God. 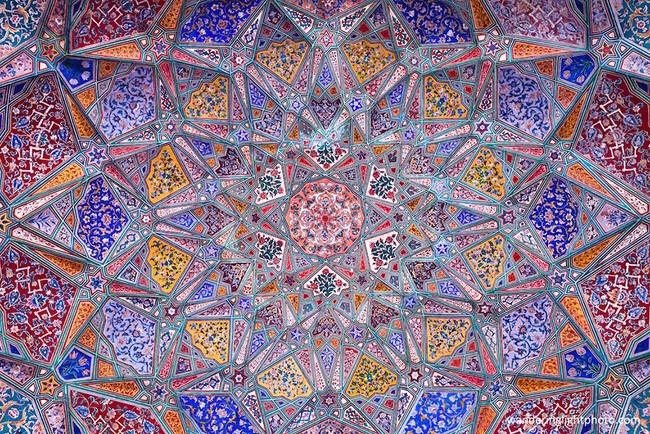 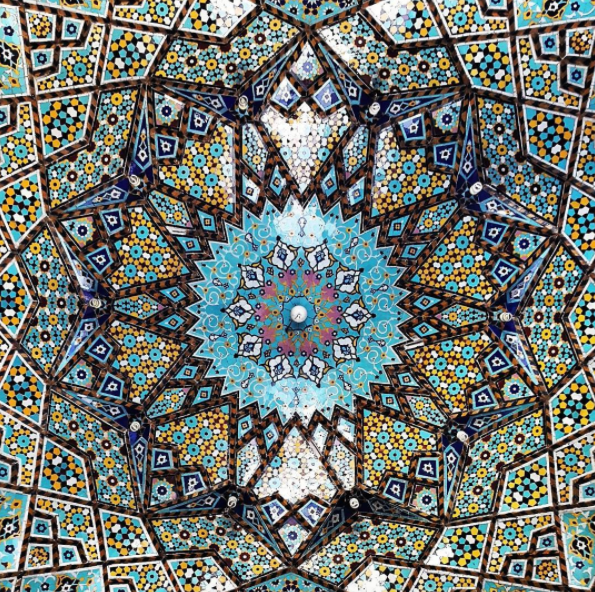 Many synagogues beyond the Eldridge Street Synagogue also look to the heavens for inspiration within their walls. Stars adorn the ceilings behind the arc of the Rykestrasse Synagogue in Berlin (below, left), the largest synagogue in Germany. They also decorate the ceiling of New York City’s own Central Synagogue (below, right). In both these houses of worship, stars appear on fields of blue, reminiscent of the stars at Sainte Chapelle. They also carry a similar scriptural significance, as within the Torah God says to Abraham, “Please look heavenward and count the stars, if you are able to count them. So will be your seed.”

Similar to the stars present in both the cathedral and mosques are the number of points of these stars. Both Rykestrasse and Central synagogue feature stars with over six points. Central Synagogue’s ceiling stars are eight-pointed, a shape reminiscent of Islamic geometric patterns. The use of this type of star reflects Central’s Moorish Revival architecture emulating the visual style of the medieval Muslim rulers of Spain. Moorish Spain was considered a golden age of Jewish life in Europe, and by the 19th century, many European synagogues were constructed in Moorish Revival style. Central Synagogue is fantastic example of Moorish Revival architecture. It’s painted starry ceiling incorporates the geometry that was so crucial to the aesthetics of the Moors while referencing a revered era in Jewish history. 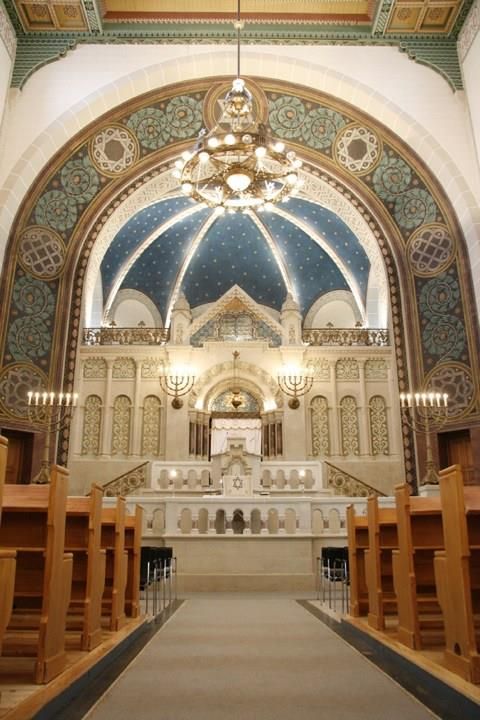 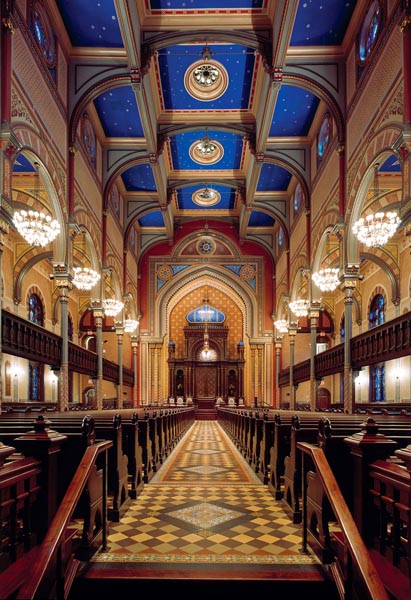 Stars at the Eldridge Street Synagogue

With such a rich, multi-faith history behind the usage of stars to decorate the ceilings of religious spaces across the globe, the stars that decorate the Eldridge Street Synagogue carry tremendous meaning. They combine faith and history while making the symbol their own. Their five pointed stars, glowing gold against a rich blue background, create a similar illusion of the heavens brought to earth as is present in Sainte Chapelle. At the same time, the celestial motif maintains the geometric influences of Islamic art present both in mosques and in Moorish Revival synagogues like Central. Throughout all of these sacred spaces, the theme of representing the divine realm on earth pervades, despite the aesthetic differences between each house of worship. Yet the stars at Eldridge Street speak volumes about how the synagogue’s immigrant worshipers created their own Jewish identity in American. They drew from the rich spiritual and artistic background that informed their faith while also referencing the flag of the country in which they had chosen to build their new lives. 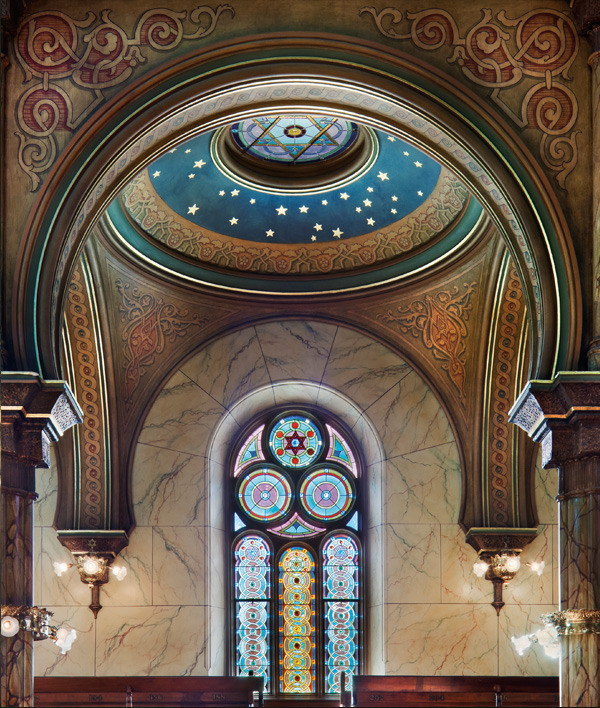 This blog post was researched and written by Mollie Wohlforth, Museum at Eldridge Street Intern